Bollywood’s beautiful actress Alia Bhatt is very busy shooting her films these days. Where the actress is currently in the news for her upcoming film Gangubai Kathiawadi. While the actress keeps sharing photos on social media in the day to come to know her fans. Where Alia Bhatt has announced her new production house just hours before now. Alia Bhatt’s production house is named Eternal Sunshine. For which Alia has also taken a big office in Mumbai. The actress has mentioned this new news while posting on social media.

Alia wanted to open her own production house for many years. After which he is now fully ready to become a producer himself. At the same time, Alia looks like Bollywood’s most multitasking actress. While she also gives her work full time, she is also seen many times with family and love (Ranbir Kapoor). Recently, fans got to see the most powerful form of Alia Bhatt’s career in Gangubai’s teaser. A teaser of 1 minute 30 seconds leaves such an impression, seeing that everyone is praising Alia. Meanwhile, Alia’s new photo has been covered among the fans.

Alia said the name of her production house 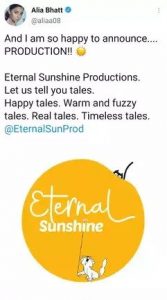 Talking about the work front, the teaser of Alia’s much-awaited film Gangubai Kataiyawadi has been released. Alia has impressed everyone with her acting in the teaser, so now everyone is eagerly waiting for the film. Gangubai Kathiawadi directed by Sanjay Leela Bhansali will be released in theaters on July 30, 2021.