Disha has already shared her first picture from the set of this film on her social media account. In this picture, the actress is wearing a ‘Hoodie of a Villain Returns’. Along with this, the actress shared this picture and wrote, ‘So we go.’ The actress is starting the shooting of this film from today. Where this film is to be released next year on February 11 in 2022. Even before this, the actress tweeted the poster of this film and wrote that ‘you will not give a chance to complain. Ek Villain Returns, 11 February 2022. ‘This action-thriller film has just one year left to release. Disha Patni has also started a countdown for the release of the film. The action-thriller Ek Villain was released in 2014. It featured Siddhartha Malhotra, Shraddha Kapoor, and Ritesh Deshmukh in the lead roles. The film was given a lot of love by the audience. With this, the songs of the film are still on the tongue of the audience. 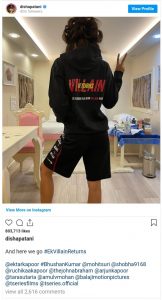 HOW DID KRISHNA SHROFF REACT?

Tiger Shroff’s sister Krishna Shroff praises her Best Friend Disha Patani. As soon as she posted the picture on Instagram, she commented, “Woohoo! All the best, my D. Kill it like you always do (sic),” along with a clapping hand and heart-faced emoji. Tiger and Disha are rumored to be dating each other.